Funny Little Wars - the revised edition - is now available for sale at:  https://www.lulu.com/en/us/shop/paul-holcroft-wright/funny-little...

Experiments in artillery or bigger balls?

Experiments in artillery or bigger balls?

For a number of years I have been working on the ‘Vauban and Shandy’ rules that cover sieges in the Lace Wars era; roughly from King William 3rd to the American Rebellion.  Some unkind persons have commented that the rules are taking slightly longer than the Nine Years War; in my defence I can only claim the wisdom of Shelby Foote.  There is only me and some very patient friends doing this, and not the much larger supporting cast of the era in question.

Some of the fits and starts of this project can be seen here on the ‘Vauban and Shandy’ blog, and some splendid games have been played – indeed a mini campaign.

One particular visit from a friend, let’s call him Tim, resulted in the gift of some large polystyrene balls.  This shows the true depth of camaraderie that Funny Little Wars has created; and is not a case of a group of people dumping their old crap on each other; in places like basements and carparks.

And then, many months later, whilst wondering how these items could be used – the answer appeared.

1.       First paint the balls and then attach to a trusty cotton wool bud. 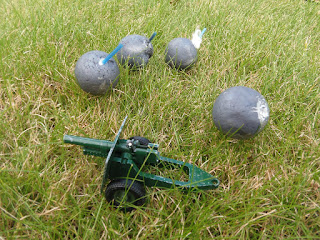 2.       Prepare your target – some unpainted Grenadiers.  Note. Please be assured that there are very few unpainted soldiers in my collection.  No more than 1000.  Hence my recent Martin Luther like ‘Confession’, nailed to the door of ‘The Winning Post, Twickenham’, that I will not be buying unpainted figures in the future.  This confession to expire five minutes after the doors open. 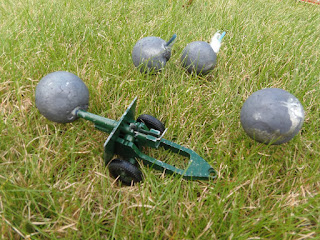 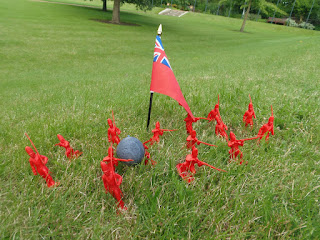 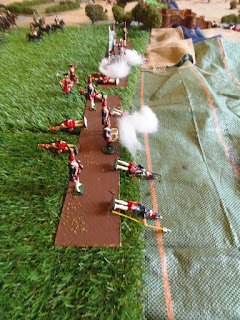 Conclusion – an easy, fun and very effective way to simulate cannonball fire.  Where it hits, hits.  And you can add a 6 or 9” roll effect.

Next the 'bigger ball' as a Mortar!