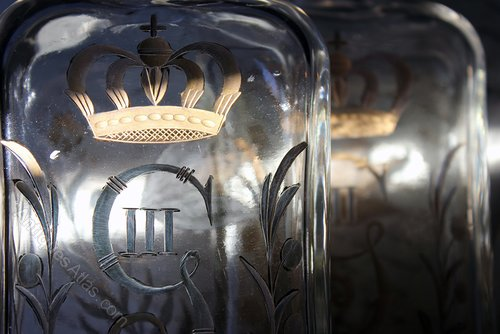 The summer months were busy with some welcome travel, on the trail of Henry Williamson and TE Lawrence in Norfolk, Devon and Dorset.  The countryside was glorious indeed in the late summer sunshine.

Activities in toys soldier land were dominated by play testing an Interwar set of rules for FLW - they included a siege game (the Alhambra, 1936)  based on the siege of the Alaczar. 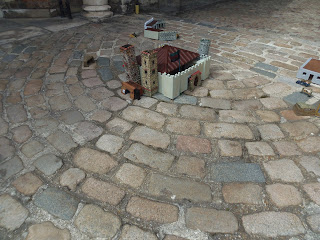 and I will be writing one up for a new FL (Inter) War  blog.

So, 'winter quarters' is now here and I can return to the Gustavian Baltic shoreline.  I continued to research various aspects of the conflict, and found a couple of quite useful books in Hay on Wye - including a little gem called 'Through Finland to St Petersburg', printed in 1908. 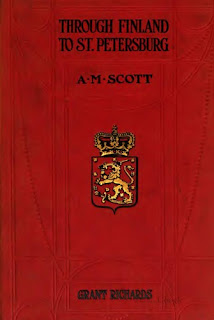 I was delighted indeed to read the opening lines, which have confirmed that I am on the right path with this project:
"In a wonderful passage in one of his most imaginative novels, Mr. HG Wells describes the coming of day on the moon."
The book has some occasional whispers about the Russo Swedish War, as Mr Scott travels across the disputed territory of 1788.  More to follow.
And in other news, Galley building continues, and some welcome reinforcements arrived from Alan in the Duchy.  They have bolstered the Russian forces and there is a lot of painting to do.
I hope that you enjoyed the summer, and that you have many happy hours to contemplate in toy soldier land...

One of the defining images of the Gustavian war of 1788 is the galley.  Both sides used these Mediterranean  style warships in the treacherous waters of the Skerries.  Here among those the shoals and islands the galleys were perfectly suited to navigate where the larger ships of the lines and frigates could not go.  The great naval architect FH Af Chapman constructed an entire Skerry fleet for the Swedish King, using many novel designs.

The first galley to join the Swedish fleet here is this resin model from Old Glory.  Others will now be scratch built. 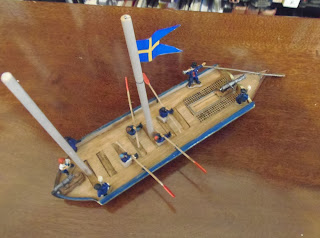 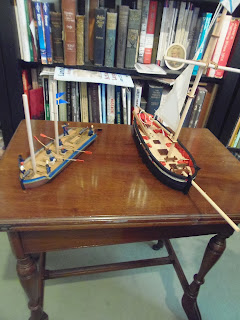 The naval battle of Svensksund was fought mainly by the coastal fleets.  It was the largest naval battle to be fought in the Baltic.  These short videos give a flavour of the campaign - from the lovely Finnish maritime museum.

The next task is looking at castles ...

The ships of the Cabinet Wars of Gustav 3rd

Readers of this diary will be aware that there is a strict adherence to the 'one true scale' as revealed in Little Wars.  A doctrinal deviation, however, is permissible in nautical matters, as 25/28mm models are deployed - and the 1/1200 scale is deployed for the campaign moves.  This has been a feature of the series of FLW games called the 'Herrring Wars' which is an imaginary series of Baltic battles in the Oscarian period (pre-dreadnought) which runs and runs and runs... 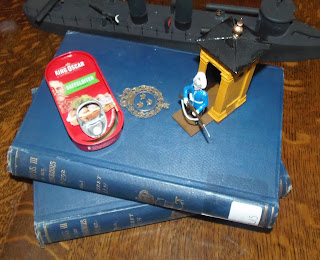 The Gustavian campaign follows this pattern.  The Skerries, coast and rivers are the backdrop to the Cabinet War, and therefore small squadrons are required.  They will reappear in a 'War of 1812' game with a change of flags. I was fortunate to find a couple of beautiful kits on the usual auction source, from the excellent Laser Dream Works.  The completed models are here, which will be the Swedish and Russian flagships.  The model has a foam hull and laser cut wooden parts.  It was a real joy to build.   It will be crewed by the Britannia range figures - which have a suitably robust feel about them.  The Russian archipelago frigate St Nikolai is pictured below - an inspiration for the Russian ship. Note that the model and original can be powered by oars as well as sail. 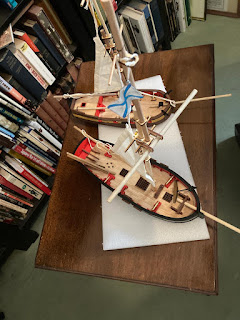 For the 1/1200 ships there is the supremely lovely Langton range - and all the actual Gustavian Baltic ships are available.  It is always a pleasure to receive these models - exquisite.

Each squadron will have a sailing ship and galleys - which form the coastal or Skerry fleet - under the command of the Swedish Army and the Russian Navy respectively.  The Galleys will be the next task.

Of course, the really great international figure of this period is F.H. Af Chapman, the naval architect of Gustav III.  This book has been a real inspiration. 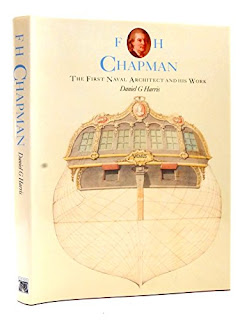 There is a lot of model making and painting in the coming months to complete...

We can be surprised sometimes by connections in life, and sometimes echoes from the past connect us with far away and long forgotten people and events.  I have been very fortunate to escape into the highways and byways of military history and wander around many historic battlefields over the years.  The landscape tells us so many things and gives us a unique perspective on the events and personalities who we encounter in the pages of the history books.  Sometimes the past connects with our own lives in a very special way, and we find a physical connection.

I am currently researching the battle of Svensksund in 1790, during the war between Sweden and Russia. The maritime museum in Finland made a remarkable discovery in the wreck of one the Russian warships, the Saint Nikolai.  It was the binding of a copy of my favourite book, ‘The Life and Opinions of Tristram Shandy’ by the Reverend Laurence Sterne. It had been on the seabed for nearly 200 years.  This lovely little three minute video tells the story;

The video has English subtitles and describes the finding of the book; probably owned by an English officer in the Russian fleet.  He was reading about Uncle Toby and Corporal Trim in the faraway Baltic in 1790 – as I read about them in faraway Iraq in 2003.  A little research revealed that this officer was probably Captain Marshall; of whom an unfinished miniature painting exists with this poignant inscription: 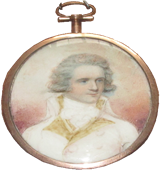 The scene now moves to a longer term project that has been in the background for  a number of years;

the Cabinet wars of the Theatre King;

The project has now started, so the Vauban and Shandy blog says a temporary farewell to Trumptonshire and moves to the Skerries of Sveaborg and Svenskskund... and it was a remarkable joy to find Tristram Shnady and Uncle Toby in these cold northern waters, a long time ago.

The town of Trumpton as seen from a distant prospect on Windy Hill.

The view from the Fosse Gate 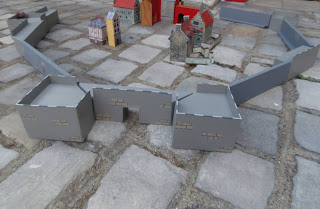 The strong German influence of the architects Elastolin & Hausser was mentioned in a number of accounts of the town in this period. 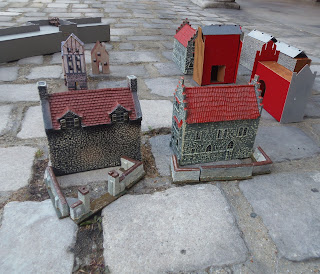 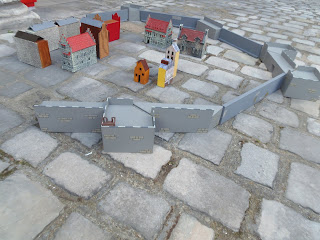 As did Raggy Dan prophesy:

'There was a little city, and few men within it; and there came a great king against it, and besieged it, and built great bulwarks against it' 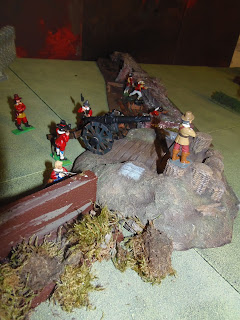 A walk around early modern Trumpton

The walls of Trumpton are in a state of lamentable decrepitude.  They may appear imposing from afar, but they have been left to crumble in many places.  As the war and investment appear inevitable, the townsfolk are working to restore what they can. 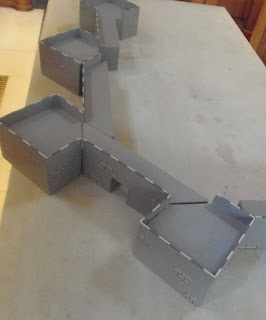 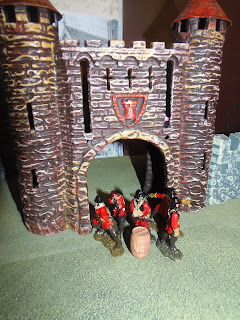 The finely appointed Camberwick gate is the finest of the four late medieval entrances to the town.  It has a continental style, the rich golden stone stands in contrast to the rather grimy and mostly collapsing town walls.  The arms and motto of the town are emblazoned here;

all are mere toys without God

The Inns and Hostelries

The Cripple and Bastard – by the Guild Church of St Brian Canto.  The headquarters during the early stages of the war, and during the sieges of the town

The great fat Big Bear – by the London gate.  The secret meeting place of the Trumpton divines during the reign of Bloody Mary

The Withered Spoon – by the Water Gate.  A dirty, dingy hole with the foulest ale in the whole county - for the meaner sort in the Borough

The Turk’s Arse – not to be confused with the Turk’s Head in Camberwick Green – by the Mill Gate.  A most peculiar place